History of the Zoological Museum

The Zoological Museum of the University of Athens has existed for around 160 years. It was the first and largest museum of its kind in Greece. The history of the Museum begins around the same time that Athens became the capital of the new Greek state.

Until the end of the 19th Century, the Museum’s staff and collaborators worked to curate, study and exhibit the zoological collections, with the dual aims of educating and entertaining the public, especially young people. In a time before television and radio, the Zoological Museum provided a unique attraction for numerous visitors. It played an important role in the general education of people living in the developing capital. Researchers studying Greek fauna, both from within the country and abroad, as well as amateur collectors, hunters and many others, enriched the Museum by donating their collections and hunting trophies.

With the advent of the 20th Century, the Museum was further enriched, and together with the Laboratory of Zoology, formed the basis of the zoological education provided to students of the University of Athens. In the 1930s, under the leadership of Professor G. Pantazis, the periodical, Acta lnstituti et Musei Universitatis Atheniensis, was published.

During the occupation and after the wars, the Museum suffered from a lack of funds and means, and so was unable to modernize or add to its collections. Then by the early 1960s, the museum was forced to close to the public, due to the need to repair the building in which it was housed.

In 1965, the exhibits and collections were moved into storage in scattered locations on the new University campus. After the Department of Biology had been built, the Zoological Museum found a permanent home there in 1991. From this time, the Museum gradually reopened its rare and valuable collections to the public, primarily to school children. By this point, the Museum’s exhibits had been enhanced with new material, such as the important collections of mammals and birds donated by the Papalios family.

Today the Museum is visited annually by more than 10,000 school children, while the building itself continues to be improved and the exhibits modernized by the addition of audiovisual media. The Museum caters for the general public, primary and secondary school pupils, as well as the University’s students. Its main goal is to promote an understanding of the value of biodiversity, so that the conservation and protection of biodiversity become important for all citizens. Additionally, younger visitors are given the opportunity of learning about the wonderful world of animals up close, at a time when most exposure to animal diversity is through electronic means. 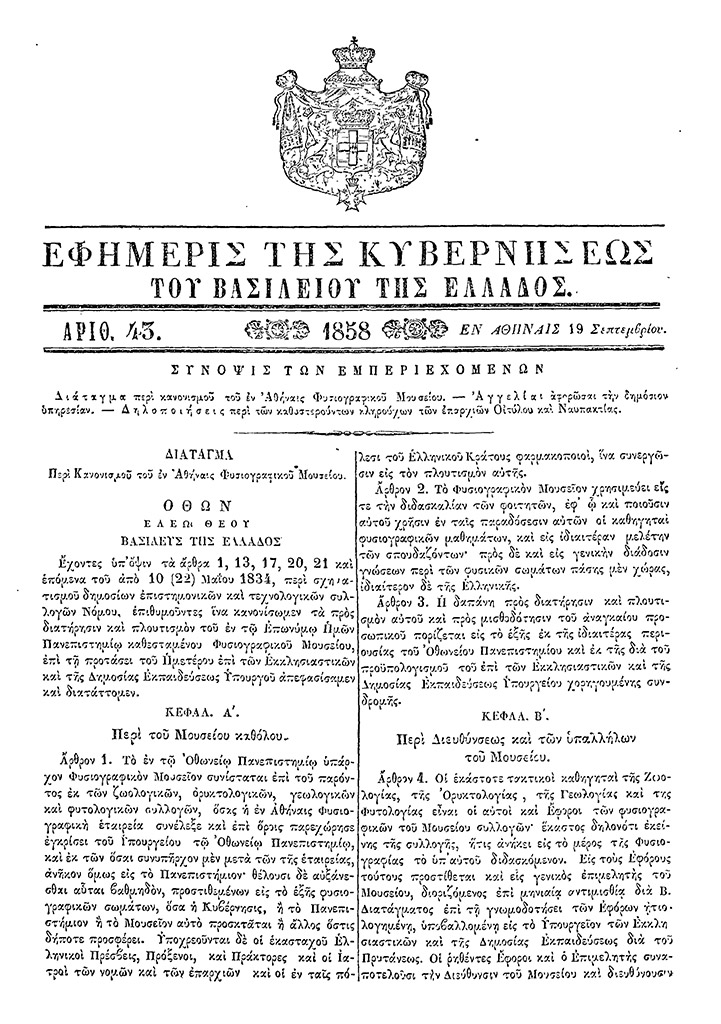 Established in the 19ᵗʰ century, it was first housed on the 1ˢᵗ floor of the Akadimias Street wing of the main University building.

In the early 1960s, the Museum was closed to the public, due to the need for repairs to the building it which it was housed.

In 1965, the exhibits and scientific collections were moved into storage in scattered locations around the University campus.

The Museum found a permanent home in the new building of the Department of Biology and gradually began to be reopened to the public.